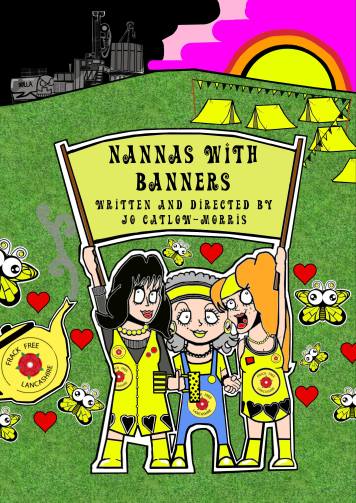 The nannas are coming!!!!!
A play about the passion and empowerment of a group of women who standing against the fracking industry will be performed at the Harris Museum as part of Lancashire Fringe Festival.
Written by Kirkham-based Jo Catlow-Morris, Nannas with Banners has been inspired by the words and testimonies of a group of extraordinary protesters who have become famous world-wide for their opposition to the development of a fracking site – the exploration and the drilling of shale gas in Lancashire – on Preston New Road near Blackpool.
The play has been developed with the anti-fracking nannas and several of them take part in the passionate, funny, empowering and engaging performance.
Nannas with Banners is Jo’s first full scale theatre project. Over the last 12 months she has worked with the nannas to write, develop and produce the show. It was performed for the first time at Blackpool Grand Theatre last autumn.
The nannas decided to take a stand against fracking in because of the environmental risks associated with the process.
They took on the mantle of the Lancashire matriarch in a bid to dispel the misplaced belief that they were professional activists. In fact, they are mothers and grandmothers and working women – artists, barbers, teachers, bakers and healthcare professionals.
The Nannas are passionate in their stance for the environment and a safe and clean future for all our children and grandchildren.
The play has taken testimonies of the nannas and woven them into a tapestry of wonderful words, music and expression.
See Nannas With Banners at the Harris Museum, Market Square, Preston PR1 2PP on Wednesday, May 22 at 7pm.
http://www.enjoyshow.co.uk
#lancsfringe